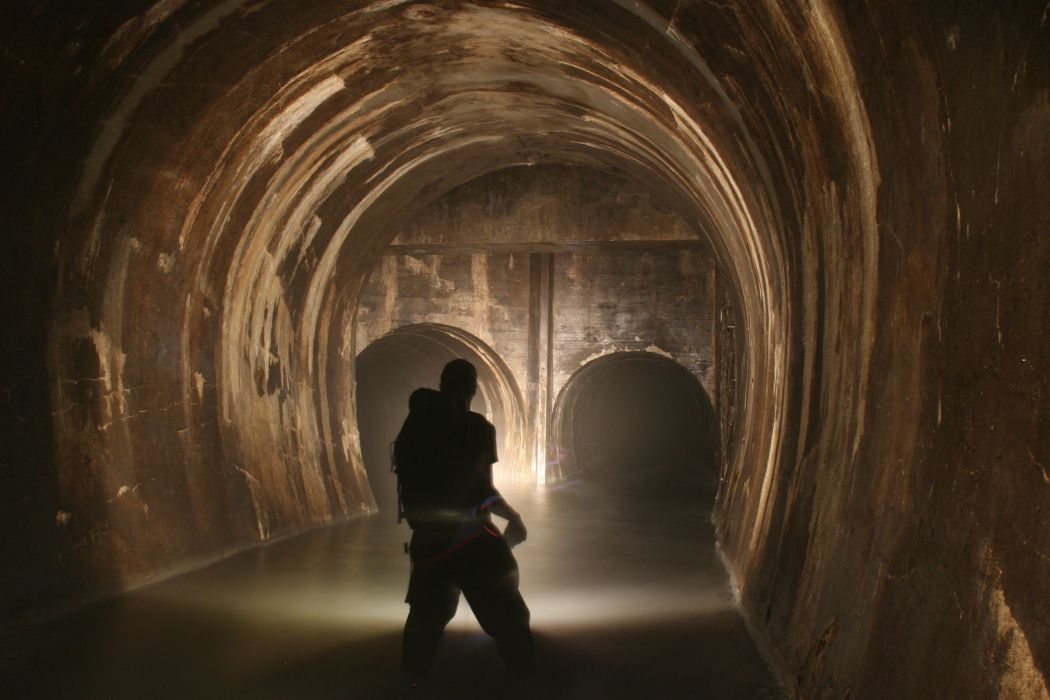 Inside the Molson Collector, somewhere beneath Rue Dickson in 2007.

When it comes to Montreal’s underground achievements, the Metro system tends to get a lot of the attention. Its sewer system, on the other hand— not so much. This isn’t really all that surprising. The subway system is something people both use and see all the time, and it’s also a fair bit more complicated than a network of tunnels designed to carry fluids. Still, in terms of tunneling achievements, the sewers built during the 1950s are worth taking a closer look at if only because they’re so often ignored. Decarie Raimbault Collector during construction in 1958.

By the time ground was broken for the first metro line in 1962, close to a decade had already passed since tunnels just as large and as long had been dug out below the surface of the island. As the populations of communities like Ville St. Laurent and Ahuntsic exploded during the post-war boom, problems began to surface beneath the ground. The existing sewer system, with pipes no larger than seven feet in diameter, could no longer handle the demands being put on it. Floods were increasing as were the number of complaints from people getting fed up with sewage spilling out into the streets and basements.

Household waste was only part of the problem, though. The increase in pavement meant that stormwater previously absorbed by the soil was now running directly into the sewers via catch-basins and street gutters. Flooded streets in Ville St. Laurent during the 1950s.

By the 1950s, it became obvious that a more substantial water and sewage disposal system was necessary. Actual treatment wasn’t yet an option, let alone on the table as a viable long-term strategy. Decades would pass before the island began work to reach that stage (see my entry on the island’s Interceptor System).

No, the idea here was simply to get everything into swift waters of Riviere Des Prairies or the St. Lawrence as efficiently as possible, where it would be whisked away from the island someone else to have to worry about.

Approximate paths of selection of sewers constructed during the 1950s, based on map data from 1962. (Click on lines for names)

The plan developed by the city’s Public Works Department under the direction of Lucien L’Allier consisted of several sewer systems to be constructed using a combination of cut and cover and deep-level tunelling techniques. Anticipating even further population growth, engineers decided to build them far larger than was necessary at the time.

Each of these collector systems were designed using a “horseshoe” shape built from cast-in-place concrete to a maximum height of 14.5 feet- essentially large enough for one of the city’s Metro cars to pass through. The combined costs for ten sewers built between 1952 and 1962 exceeded 50 million dollars. Atlas Construction employee during an inspection of the Decarie Raimbault sewer in 1958.

Of note on the northern side of the island was the 13 km long Decarie Raimbault collector. It was built to transfer sewage from areas as far away as Outremont. The Raimbault portion of its name was taken from the sprawling creek system that once stood in its place. Key Construction LTD workers inside a 14′ cut-and-cover segment of the Meilleur Atlantique sewer, 1953.

Also in the same region, the Meilleur Atlantique collector was constructed to bring wastewater from as far South as Villeray to the shores of the community of Bordeaux near the Provincial detention centre. Inside the Molson Collector with the tunnel boring machine nicknamed ‘Jumbo’ by the Atlas Construction Company.

On the South shore, the five mile long Molson collector (aka the Molson Creek Tunnel) was designed to deliver wastewater of Anjou, Maisonneuve and Rosemont into the St. Lawrence. Tunneling had initially started in 1937, but its construction was twice halted, once during WW2 and again during the late 1940s when the city decided to catch up on other sewer projects. It wouldn’t see completion until 1956.

(All b&w photos courtesy of the City Archives of Montreal) 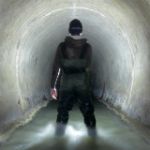 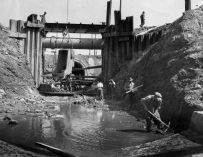 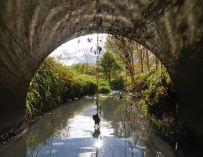 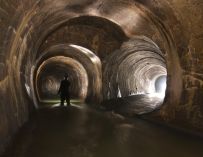 An in-depth look into the extensive post-war sewer systems of Montreal's suburbs. How the optimism of an era defined the scope of what's found today